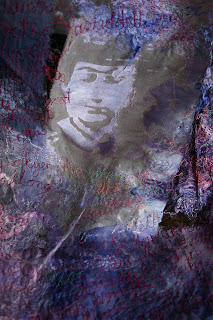 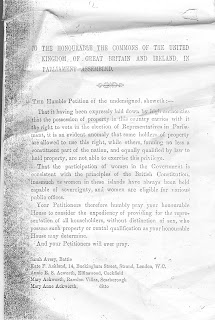 Here is the title page of the Petition . It was one of those serendipitous moments when I was sitting having coffee with Kate Perry the archivist at Girton College and saw on a bookshelf a bound volume of Suffrage Pamphlets which I took to look at out of curiosity, as I was reading the Emily Davies papers at the time. Both Kate and I squealed with excitement when my suspicions were confirmed...I had been told that usually petitions to parliament were burned after the signatures had been counted. It turned out that Emily Davies had organoised the printing to distribute to MPs and the press to prove what respectable business women, teachers, wives and widows were asking for full citizenship.
The second photograph is a detail of the Suffrage Petition hanging which I made in 2002. After completing the Thesis, I felt guilty about the 900 women out of 1,499 whom I had not managed to trace in 6 years of research. They were the lost women- so I recorded their names on a huge stitched hanging. This detail shows Lady Amberley- one of the few women whose photograph survived, and the names of women stitched into silk fibres, holding the whole piece (1metre wide x 2 metres long) together
Posted by AD at 03:07