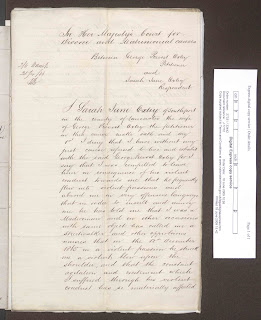 Today I was very excited and eager to get back to the computer because I had made a discovery- The mother of AM Ainsworth, who had also signed the petition, was Sarah Jane Oxley. In 1861 she had married for a second time, leaving her grown up children with Anna Maria at their head, and living nearby in North Meols Southport. On Thursday I had discovered that her husband had filed a petition at the Liverpool divorce court in 1866. My imagination went into overdrive- I visualised a husband driven to distraction by his wife’s support for votes for women- appealing for a divorce, but being turned down (they were still living together in 1871, having survived his bankruptcy in 1869) The hours waiting for the delivery of the document on line were filled with fevered speculation- Evidence at last for a reaction from a husband. to his wife’s support for this cause. I was aware that divorce was rare and expensive, and was eager to hear the juicy details.
My Supervisor Professor Angela John used to remind me that these women were dead- I would bounce into a tutorial thrilled by the fact that – for example- Mrs Crudelius had lived long enough to see her elder daughter’s success in the University Local Exams which she had fought for with Emily Davies, though she never was able to vote. ..But my reaction to this document was as one would feel about a living friend, and as I read it I was near tears.
For Sarah Jane Oxley had left her husband in December 1865. His intemperate verbal abuse had escalated to physical abuse, and her doctor had warned that her health was in danger if she returned. In May 1866- the very month that this 43 year old woman signed the petition, George P Oxley took her to court to get her to return to him and tender conjugal rights. And there she was in the 1871 census back at home with him. Here was a woman who at that very moment in time indeed needed rights and a voice.
Sadly the document from Kew was longer that the 10 pages I had paid for- so I will have to wait for the end of the story- but I am pretty certain what it will be. When we don’t bother to vote at elections we need to remember that it was not just the vote that these women fought for. If George beat Sarah Jane and called her mad and a streetwalker before she signed how would this respectable Canadian Liverpool shipbroker have reacted when he heard that ‘his’ name had been printed and distributed to MP’s and the press in support of votes for women? The next few years must have been hell.
Though many of the married women who signed wrote their husband’s name, interestingly Mrs George P Oxley signed herself S J Oxley
Posted by AD at 10:25